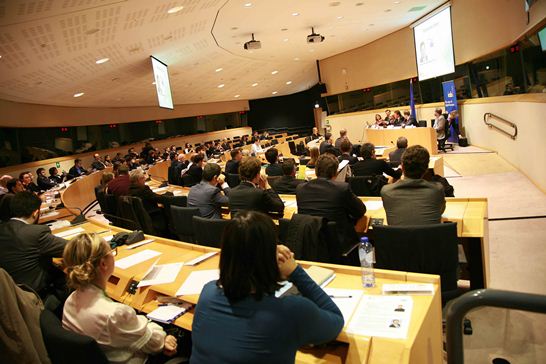 The launch was a great opportunity for leaders of innovative European online companies to deliver their messages about how the EU could better support this flourishing ecosystem straight to policy makers.

As the Digital Single Market is one of top priorities of the new European Commission, and the EU institutions are currently discussing a range of dossiers that will have a critical impact on the digital world (e.g. data protection and copyright), it is crucial that decisions are based on a good knowledge of the European online ecosystem.

Unfortunately, awareness of the European digital players and their contribution to growth and job creation is not as high as it might be within EU institutions.

This is due in part to the fact that a lot of the European digital champions operate in the B2B space, rather than being consumer-facing – so the companies don’t become household names.

Secondly, of course, European Internet companies are mainly SMEs and have no dedicated public affairs staff in Brussels.

To help close the knowledge gap about the great innovation potential we have in Europe, and provide European digital businesses with a strong voice in Brussels, IAB Europe decided to create Digital Innovation Showcase Europe (DISE) with the support of national IABs.

DISE is a network of innovative European digital players that are driving the transition to the data-driven economy in Europe.

The goal is to share these best-case examples, highlighting new business models the Internet is fostering and giving its European pioneers a voice in the policy debates that will have a critical impact on their future, and ours as a region.

Each DISE member has a story to tell and a message for the EU institutions about how policies that originate in Brussels land in the real world.

Their messages are gathered on the DISE online platform where policy and media professionals can learn about the various online business models and read digital entrepreneurs’ analyses of how the EU could better nurture this high-growth ecosystem.

This was the occasion for DISE members to explain to policy makers their business models and provided them with feedback on what they need in order to continue innovating and providing high-value jobs.

“Trust European start-ups”, Christopher Engman, CEO of Vendemore, urged, “give them clear and harmonised rules and they will take care of the rest.” Speaking about the proposed Data Protection Regulation, he warned “The drafts I have seen would put my company out of business in three weeks”.

Vincent Potier, COO of Captify, recalled, “Europe does have a wealth of innovative digital companies, both start-ups and bigger ones. So the first rule needs to be, don’t damage what is already out there.” He explained, “The online advertising industry does not care about the individual, it needs to segment the masses. The rest is superfluous.”

Commission officials from different Directorates, and Euro-parliamentarians, both welcomed the dose of “real world” feedback, and a good channel has been opened to allow the institutions to tap the network for business and technology insight going forward.

Though some of what the companies had to say, particularly on the current data protection reform, was highly critical, there was a clear will on the other side of the table to ensure that policy decisions and EU-level investments do take account of the needs of the entrepreneurs that are actually building Europe’s digital future.
Mr. Laso, Head of the Startup Europe programme at the European Commission’s DG CNECT stated:

“Commissioners Ansip and Oettinger are ready and willing to listen to concrete, actionable proposals that will enable them to do the best possible job of supporting Europe’s Internet ecosystem. Input and feedback from companies such as the DISE network will help ensure that its investments make business sense and enable rather than hampering future growth and innovation.”
How much the policy development process permits those needs to be reflected in the final outcome remains to be seen.This is only the start of a dialogue and IAB Europe will continue to coordinate more such activities in 2015.