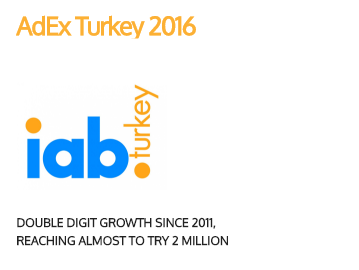 Considering the recent developments in the industry, this year IAB Turkey changed the method of analyzing data. One of these major changes is positioning “mobile” as a platform, rather than a format. Keeping only “search engine performance advertising” under “Search” category, moving “search engine ad network performance advertising” under Display are the other ones.

IAB Turkey reveals that display ad spend grew by 11% and reached to TRY 1,059.1 million. In Display Ad Category, Impression or Click Based Ad Investments had the biggest share with TRY 821.4 million. While video ad spend rises by 34% to TRY 179.8 million, Native reached to TRY 58 million.

Whereas Search Engine Ad Investments reached to 706.6 million TL, Classified & Directories escalated to TRY 91.1 million. E-mail had decreased to TRY 5.6 million probably because of Law on Regulation of Electronic Commerce. On the other hand,      In-Game Advertising had increased to TRY 10 million.

Out of 1,872.4 million TL of total digital ad spend, TRY 601 million was invested to mobile platforms, including Display, Search, Classifieds & Directories, E-mail and In-Game Advertising. 64% of social media ads, which corresponds to TRY 262.4 million, invested spent on mobile devices. In 2016, programmatic trading proceeded to grow and reached to 993.8[1] million TL.

Chairman of the IAB Turkey Dr. Mahmut Kurşun, states that “At the beginning of 2016, digital ad spend had increased by 20%, which was amazing. However, because of known reasons, after mid 2016, there had been a considerable slowdown which had affected yearly performance. Still 14% of growth rate is a success. Digital is the locomotive of ad industry in Turkey, like the rest of the world. On the other hand, Accenture Strategy – Digital Disruption Growth Multiplier Report states that 22.5% of the world’s economy is consisting of digital economy. Digital technologies have a serious impact on business practices therefore digital transformation is an important topic in today’s business world. IAB Turkey, in cooperation with IPSOS Turkey and Bosphorus University Administrative Sciences Faculty, has prepared a Multiplier Effect of Digital Advertising Research, which states that; every TRY 1 invested to digital advertising increases national income by TRY 17.2. Moreover, this report states that, in 2015, digital ad industry contributed to employment by 1.26 people with its direct and indirect effects. Since digital ad technologies are among the tools to improve digital economy, sustainable growth of digital ad industry is crucial for Turkey.”

[1] The rise is too big because of low base and change of data analysis.